The European Broadcasting Union (EBU) is the world’s leading alliance of public service media (PSM). We have 117 member organizations in 56 countries and have an additional 34 Associates in Asia, Africa, Australasia and the Americas. Our Members operate over 2,000 television, radio and online channels and services, and offer a wealth of content across other platforms. Together they reach an audience of more than one billion people around the world, broadcasting in more than 160 languages. The EBU operates Eurovision and Euroradio services. 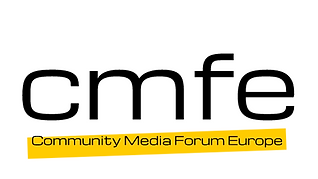 Founded in 2004, Community Media Forum Europe (CMFE) represents networks, national federations and organisations active within the Third Media Sector sector at the European level. CMFE supports community media in maintaining a clearly distinct identity alongside the national public service and private commercial media, raising awareness of their contributions to pluralism, democratic participation and media literacy. Through research, inputs to policy-making and projects CMFE advocates for the legal recognition and funding of the non-profit media sector. CMFE has an observer status with the Steering Committee on the Media and Information Society (CDMSI) of the Council of Europe and is part of the CoE International Non-Governmental Organisations (INGO) Conference. Currently, CMFE has 98 members (of which 25 are National Federations) from 24 European countries. According to the CMFE 2012 mapping, a total of 2237 community radio stations and 521 community television stations are active across Europe

COMMIT was founded in 2010 and works to extend and improve further training for community media practitioners in Austria and in Europe. COMMIT organises trainings and develops concepts for further education in the field of community media and adult learning. COMMIT works towards professionalization and formal recognition of community media training and of the acquired skills. Organisational members of COMMIT are the community radio and community TVs in Austria, personal members are expert from the connected scientific fields. COMMIT runs its operations mainly based on funding from the Austrian non-commercial broadcasting fund and project support from the Ministry of Education and EU-Programmes.

COSPE, established in 1983, is a registered non-profit association recognized since 1984 as Non-Governmental Organisation (NGO) by the Italian Ministry of Foreign Affairs and by the European Union. Cospe implements projects in about 27 extra-EU Countries, in Europe and in Italy promoting fair and sustainable development, global citizenship, intercultural dialogue and human rights. In Italy and Europe, it promotes activities to prevent and combat racism and discrimination against migrants, minorities, refugees and asylum seekers and undertakes intercultural activities and training courses in schools.

The Media Diversity Institute (MDI) is an international organisation entirely devoted to working with the media to prevent conflict through improving reporting on race, ethnicity, religion, human rights and other diversity issues which can cause disputes/conflicts at the local, national, regional or international level. Over the last 19 years MDI has worked in Western, Eastern, and South East Europe, the former Soviet States, West Africa, the Middle East, and South Asia. MDI promotes responsible journalism as a means to improve inter-community relations, increase tolerance, and encourage dialogue among individuals and groups coming from different cultural, ethnic, or religious backgrounds. We work with journalism academics and students, media decision makers and reporters, as well as with CSOs specialised in diversity issues.