Mojca Pajnik is Associate Professor at the Department of Communication, Faculty of Social Sciences, University of Ljubljana, and senior researcher at the Peace Institute, Ljubljana. Her recent books include Populism and the Web: Communicative Practices of Parties and Movements in Europe (ed. with B. Sauer, Routledge, 2018), Contesting Integration, Engendering Migration: Theory and Practice (ed. with F. Anthias, Palgrave, 2014) and Racism: Cut Up World (ed. with E. Valenčič, Journal for the Critique of Science, 2015). She is author of numerous articles and chapters on citizenship, migration regimes, racism, gender (in)equality and media. Brankica Petković talked to her about media reporting and media policy in Slovenia and how the prevailing approaches reflect the situation with migrations in the country. Brankica Petković works also as a researcher at the Peace Institute in Ljubljana and created the Fact sheet on Media and Migration in Slovenia for the New Neighbours project.

References to the sources mentioned in the interview are listed below. 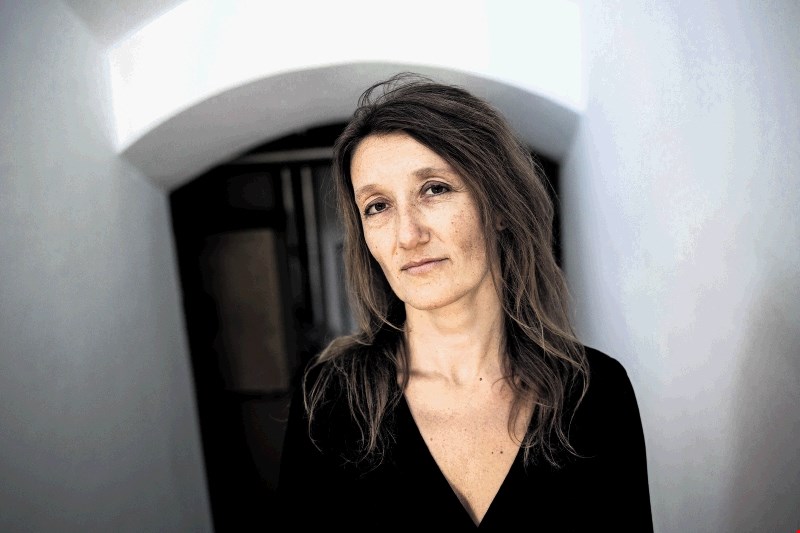 What are the main patterns of the Slovenian media reporting migrations in the recent period? Are they different from reporting patterns in the previous periods, when other type of migrations were in focus, e.g. forced migrations from the wars in former Yugoslavia?

The analysis of the prime-time TV news programme (Dnevnik) at the public broadcasting, Radio-Television Slovenia, covering a selected period in 2015 showed that the television news “fetishized” the elite sources, such as politicians and other governmental officials, adopting paternalistic tone of securing the state from migrants (Pajnik 2017). Television performed a “collaborative role” in staging the state of emergency, presenting refugees as a threat to security of Slovenian people and the (nation)state. The discoursive frames of militarization and securitization were the most dominant, coupled at times with the frame of conditioned humanitarianism, suggesting that we need to feed the refugees, and then get them out of the country. Voices of the alternative publics such as no border movements, volunteers, NGOs, not to mention migrants themselves, were mostly absent (ibid.). The analysis of Odmevi, a show at public television offering interpretation of the day, showed the construction of “the opinion corridor” (Luthar 2017) – the selection of the external voices invited in the show contributed crucially to treat migration as a problem within the parliamentary mainstream discourse, producing a complete marginalization of all other views (ibid.).
The “collaboration” of the media with the elites was also found in the analysis of the genre of commentary published in the Slovenian quality daily newspaper Delo. The analysis of journalists’ commentary on migration in a selected period of 2015 showed how policies related to the quota system, the visa regime and the Schengen agreement were legitimized, producing Eurocentric imaginings of Europe, and reproducing portrayals of migrants and migration as a problem for European values (Pajnik 2017).
Media discourses on contemporary migration show many similarities with reporting in the early 1990s when the refugees fleeing war in Bosnia-Herzegovina were presented as a problem and a threat to public order, the state and its borders (Doupona Horvat, Verschueren, Žagar 2001). The resemblance to today’s reporting is also seen in media in 1990s prioritizing discourses and policies of the political mainstream, which legitimized the discrimination practices of the state under the pretence of “securing” the Slovenian people (ibid.). Another resemblance is found in the use of metaphors, both the past and the present period show similar language, labelling refugees and migrants as a flood, a torrential river, a flow that can not be stopped, suggesting an emergency situation in a country that is about to collapse (ibid.; Jalušič 2001; Kuhar 2001; Pajnik 2007). A later study found the emergence of human-interest stories in  the 2003-2005 print media analysis that was not a genre of reporting in the 1990s. Moments of compassion with once Yugoslav compatriots arose in stories about ‘the-now-refugees’ in Slovenia facing several problems in procedures of arranging documents, in housing, work and health security. These stories were written in an emphatic and moralistic way at the same time, while their underlying framing was an expressed need for “them” to adapt to “us” and our hospitality (Pajnik 2007).

Are there any differences between media types or public and private media? What influence differences, if there are any?

I would say that the general assumption that private and tabloid media show different patterns of reporting if compared to public media is a valid one – indeed there are differences –, but increasingly there are also similarities. Not only privately owned, but more and more also public media are dependent on ratings and commercial/advertising revenues, which renders them more vulnerable to sensationalist reporting. To add, one should also consider the fact that what remains of the public media in Slovenia is limited to Radio-Television Slovenia, together with its MMC online news portal, while the entire print media sector has since long been privatised. There is lack of research that would compare the public TV and the private POP TV media reporting on migration while there are studies that analysed tabloid press.
A study analysing the reporting of the daily tabloid with the largest circulation Slovenske novice in 2001 when migrants from countries other than former Yugoslav republics found their way to Slovenia showed that the newspaper (in contrast to quality press reporting) was primarily open for intolerant and xenophobic statements by anonymous citizens (Kuhar 2001). Migrants remained an indistinct mass without a voice and presented as a threat to Slovenian people. Predominantly the discourse pictured migrants as a devastating force for the country, as criminals who steal from the locals and as a health danger spreading infectious diseases among the Slovenian people (ibid.). Comparable discourse patterns were found in a more recent analysis of reporting migration in Slovenske novice in 2015 showing the prevalence of the binary dichotomies of “us” presented as victims and heroes and “them” embodying a threat to the culture and security of the Slovenians (Vezovnik 2017). Both studies reveal some central features of tabloid discourse such as the prevalence of moralistic discourse, sensationalism and excessive emotionalisation.
Comparing the different kinds of media we should also mention the specificities of reporting of Demokracija and Reporter (weekly magazines), and Nova24TV which are self-described as right-wing-oriented media. The analysis of reporting in 2015 of the two weekly magazines found the predominant framing of the refugees as all Muslim migrants and as a cultural and civilizational threat to “our” freedoms (Pušnik 2017). The analysis showed how two essential points of extreme right discourse, migration and Islam, are united on the topic of migration, which results in the representing of refugees as “alien” to “our” country. The reporting showed discourses largely based on authoritarianism, militarism, nativism and ethnic nationalism, the culturalisation of economic policy and on the techniques of arousing disgust and hatred (ibid.), i.e. discoursive features typical for the extreme populist right (Pajnik and Sauer 2017).

Does the media system in Slovenia provide opportunities and support for communities of refugees, asylum seekers or citizens with migrant background to establish own media or integrate in established or alternative media with own programming?

There are some migration-related media shows within public broadcasting and mostly within progressive media outlets, while in general the opportunities are limited, neither strategy nor political will exists that would stimulate migrant’s own media projects. The Act of Radio-Television Slovenia mentions communication, democratic, social and cultural needs of only some minorities, namely the officially recognized Italian and Hungarian communities and Slovenians living abroad. Similarly, the Mass Media Act prioritizes communication needs of recognized minorities; financial support for media outlets of other minorities is disproportionally lower. Such mechanisms need to be  critically analysed as policies foregrounding ethnic nationalism, and sustaining the division between the “autochthonous” (i.e. old, real and recognized) and “other” minorities.
Indeed, these communities have own media shows while no legal stipulations or policies exist that would promote needs of other minority communities. For long, more than 60.000 households with backgrounds related to Yugoslav successor states were not represented in public broadcasting, while commercial media haven’t shown any interest whatsoever to open up their programmes and policies to create communication opportunities for people with migrant background. Based on public debates and bottom-up engagement the show NaGlas! started to broadcast at the public television in 2015, and the show Sami naši at Radio Slovenia in 2016, both aiming to address the needs of these communities. Apart from public television, opportunities for migrant’s own media are provided by “engaged” media, such as Radio Student, one of Europe’s oldest non-commercial, alternative radio stations. The radio regularly broadcasts shows created by and for the people with migrant background, and they similarly stimulate Roma minority media production.

What we know about communication practices, capacities and needs of asylum seekers, refugees and migrants in Slovenia?

Research we have conducted in 2011 among migrants in Slovenia showed how migrant’s use of digital technologies, especially mobile phone and computer, helps to alleviate distance with family, friends, and how it enables following news that are of interest and can be related to migrants’ country of birth. We also found that online communication shapes distinct migrants’ lives in transnational milieus, influencing their sense of “home”. The analysis of migrant’s communication practices confirmed how “home” in exile is “anyplace”, how temporary and movable home can be; it can be re-built, reshaped and carried in memories. At the same time, the study showed how migrants face danger when communicating due to the fact that new technologies facilitate new possibilities of control over people’s practices and movements (Pajnik 2015).
A more recent study confirmed such a double role of technological advancement that on the one hand shows how mobile phones can facilitate migrants’ journeys and can jeopardise their plans at the same time (Zavratnik and Cukut Krilić 2018). Migrants’ experiences, NGO and activist reports have confirmed in the past few years violent practices at the Slovenian-Croatian border when the officials take away digital devices from migrants. Being disconnected gets even more troublesome in vulnerable situations of seeking asylum or in being at risk of deportation. Migrants’ phones and their email communication, including other digital traces, collected through the biometric databases, screening and “smart” decision-making tools have been (mis)used to construct refuge digital routes based on which people are then denied asylum and are deported.
Results of various research that we have conducted at the Peace Institute on migration and media point to several different communication needs of migrating subjectivities, that, especially for the recent refugees, include the right to use and possess the media at any circumstances, the right to use the media safely, and be secured from misuse of personal information resulting in push-backs. Communication needs thus depend on the imposed statuses that produce different vulnerabilities. If those seeking asylum are requesting the right to access the media and the right of possession of technologies, needs of, for example migrants staying longer in the country, i.e. based on work permits, or second generation migrants also express other demands such as fair representation in the media or opportunities to establish own media.