Leila Ben Salah is a freelance journalist who collaborates with Radio bullets and works as a writer on the daily show “L’Aria che tira”. The interview with her was conducted by Sabika Shah Povia, who together with Piera Francesca Mastantuono, also created the Fact Sheet on Media and Migration in Italy for the New Neighbours project. 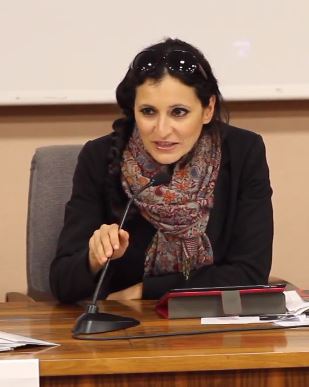 How does the media narrative influence people’s perception of the migration phenomenon? And to what extent?

The media narrative influences people’s perception of the migration phenomenon a lot. TV is probably the most powerful tool the media has to reach out to the population. In fact, in Italy, 80% of people still get their news from television. This is probably also because of a very high median age in the country. Migration is depicted as the biggest problem of Italy, while it is not. Our problems are related to the economy, work and unemployment. Our youngsters migrate and leave the country. We’re experiencing a brain drain and our most talented youngsters never come back. We need more skilled workers. Yet people keep thinking we are being invaded by migrants. When you look at the numbers and facts, it’s obvious this is not the case.

What are the most frequent mistakes journalists make when discussing this topic on TV?

In TV I often notice a lack of knowledge on the correct terminology to adopt when discussing migration-related topics. Journalists attend various compulsory courses that teach them when to use refugee and when migrant or asylum seeker and so on. Yet they don’t apply this knowledge to their day to day work. Not making a distinction doesn’t help the viewer understand who is who, who has the right to asylum and who doesn’t.

Another common mistake is that of chasing a story only when everyone else is doing the same. We only show migrants getting off boats in places like Lampedusa, and we rarely talk about what happens next. Not narrating the integration process and continuously only focusing on the largest arrivals, reinforces the idea of an invasion taking place in the mind of the viewer.

The tone of the news reports on migration is often alarming and contributes to creating further tension, giving far too much attention to local crime stories, that end up turning into national headlines. It’s very annoying. Sensationalism is a common trait on Italian TV. Migrants are seen as numbers, until they are dead. When they die, people feel solidarity with them. This kind of journalism encourages either fear or pity in the viewers. There are no neutral stories on migration. I personally find it very frustrating.

What good practices would you recommend?

I noticed a change in the way people see migrants over the course of the years. It is necessary to change the mentality of the general population on this topic to create a more friendly and tolerant atmosphere. Politics and propaganda fuelled hatred. Certain right-wing populist parties relied heavily on criminalizing migrants and found a shortcut into people’s hearts by creating a common enemy. But it’s not just politicians’ fault. It’s also failed integration policies and an overall sense of dissatisfaction. Journalists shouldn’t contribute to exasperating an already complicated situation. We should talk about facts and base our analysis on numbers, reflecting what the reality is.

Countries of origin of migrants and diaspora

How does Italian TV talk about the rest of the world?

We don’t really talk about it and if we do, we focus on the UK and Europe, or the USA at most. But there are so many countries that practically don’t exist for us. International news are almost completely absent. You need a major breaking story to make headlines in Italy with a foreign country. My own country of origin, Tunisia is the first for arrivals in Italy this year, yet it still barely exists in the media. It was discussed when a terrorist attack took place there targeting many European citizens, or during the Arab Spring. Then it went back to oblivion. Yet, important elections were held earlier this year and it’s practically a neighbouring country for Italy, so it would deserve more attention.

Also, we don’t give in-depth analysis, only superficial coverage of certain events. If people are not interested in what’s going on in the rest of the world, I believe it is our fault. We don’t give them enough information and we don’t highlight the relevance of the context in which things happen.

Stories about the diaspora and countries of origin of migrants are always an exception. Why should it be important to talk more about them?

We could explain a lot of issues, especially related to immigration, more easily and more logically if we had the bigger picture in mind. This is what our job should be. Explain where people come from, what pushes them to leave, why they decide to stay. We’re missing this context. At the most we get emotional stories of refugees coming here and risking their lives. But this way we keep portraying them as victims and not as resources. This cliché doesn’t allow us to move forward.

What is the representation of the migrant woman on TV?

Journalists tend to distinguish between the women who are raped in Libyan detention centres and all the others. The Italian women have less solidarity for Arab women. In the past they used to be depicted as victims, oppressed by husbands and religion. Now there’s not even that. They are mostly enemies. There is a lot of fear of these women and Muslims in general, that has now turned into hatred. From 9/11 onwards, it’s been a crescendo.

In what contexts do we talk about immigrant communities on Italian TV? And how are they represented?

Mostly the communities are depicted as closed communities, living in ghettos. The communities that are best integrated are shown to be an exception. Also, their foreign element is always underlined, especially in relation to crime stories. Very rarely they are spoken of as Italians, even if they grew up here. I would like for us not to have to tell positive stories as if they were exceptions, but as normality. The negative, that yes, can be an exception. Also because it’s not one’s nationality that makes him or her a criminal.