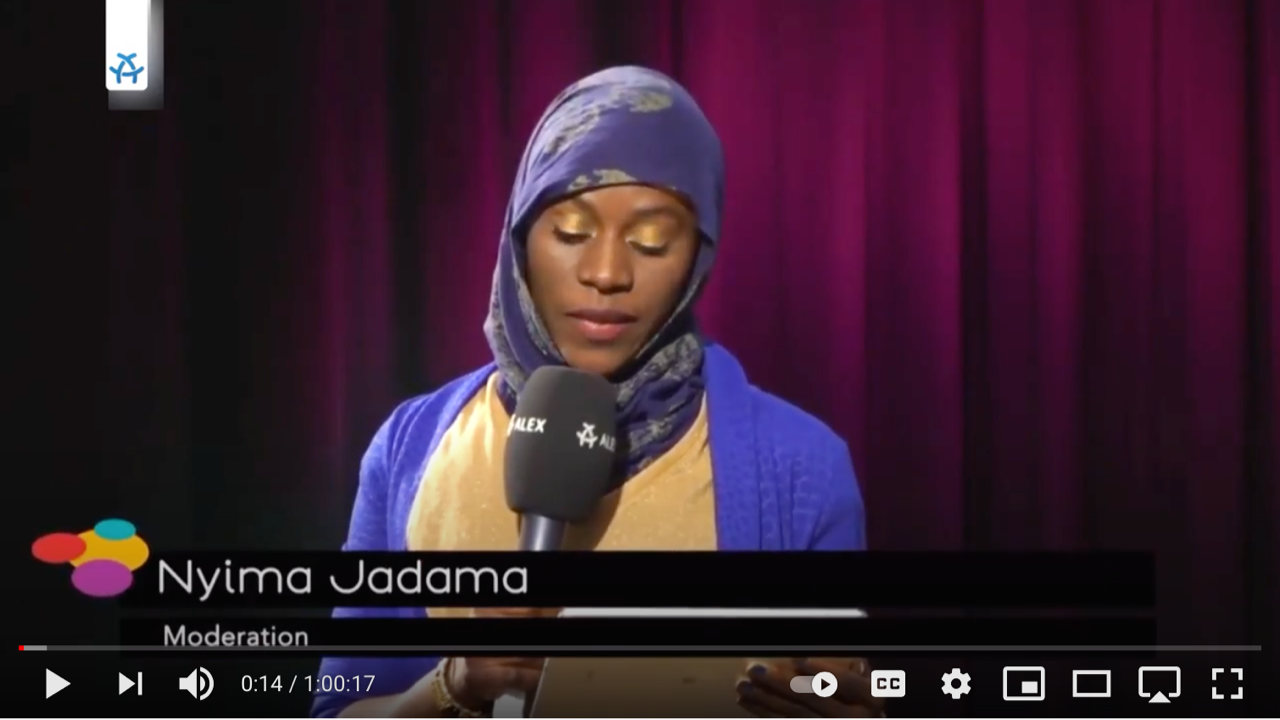 Nyimas Bantaba – a safe place for migrants and refugees

In her programme at ALEX Berlin, Nyima Jadama wants to give migrants and refugees a safe place where they can voice their problems and get involved in society. But who is Nyima, and how was her show created?

“Nyimas Bantaba” is a place for migration and women’s power: Nyima Jadama comes from the Gambia. She had only been in Germany for two and a half years when she applied for an integration traineeship at ALEX Berlin. At first, Niyma did not dare to take this step: “There were so many requirements,” she says. These included a residence permit, which she did not have at that time. That’s why Nyima was initially very worried about whether she would have a chance at all to get the training place. But she had one decisive advantage: Niyma had already worked in journalism before her traineeship, as she worked as a media educator and presenter in Freiburg at Radio Dreyeckland.

It all started with the traineeship

In the end, Nyima was able to prevail over the other applicants and complete her 18-month integration traineeship at ALEX Berlin. During this time, she learned a lot about the media sector, she says: “The traineeship helped me a lot.” Nyima went through many different departments in the TV and radio sector and was even able to complete several internships in external media houses. During her traineeship, she also attended the Berlin School of Journalism, where she took German courses, among other things. Overall, Nyima was able to learn a lot about working in the media as well as develop her competencies and skills in these areas.

What does “Bantaba” mean?

After her traineeship, Nyima got hold of a journalism scholarship in Leipzig. It was in this context that her first own programme, “Nyimas Bantaba”, was created. The talk show is produced once a month by ALEX Berlin. But what does “Bantaba” actually mean? Nyima reveals: The word comes from her home language Mandinka, which is spoken in West Africa. The journalist explains that Bantaba is a big tree under which the community in The Gambia gathers to talk about the concerns of society. Based on this, she wants to create a space in her programme to talk about culture, migration and women’s empowerment. Accordingly, people who are active in these areas will be guests.

Talking about migration with migrants – not without them

Nyima has a clear goal with her programme: to talk about migration with migrants – and not without them, as is often the case in the media. She also wants to create a stage for refugees and migrants where they can be heard. It should be a safe place where people can express their problems without fear. Nyima tries to give migrants a voice and a place in society. “I believe that this place is still missing,” she says. So far, there are not many migrants working in the media. According to Nyima, this is because these people often do not have enough education or bureaucratic hurdles block their way.

“Media is close to my heart,” Nyima explains. In addition, the topics covered in the programme are vital to her. It is essential for her to get the voice of migrants and diversity into the media. That still happens far too little, she thinks. For this reason, she works on her programme with a lot of passion.

Nyima has already produced four episodes of her Bantaba. The first episode introduced the Kiron Open Higher University: This is an online platform that aims to break down existing barriers to higher education for refugees through digital learning and support services. Nyima spoke with founder Markus Kressler and Ehab Badwi, a former Kiron University student. Episode 2 featured Muhammed Jadama and Raf Olayinka Awolola from Terre des Femmes, who spoke about their fight against gender-based violence. Two other contributors to Terre des Femmes were present in the third episode to discuss their activism against female genital mutilation.

With its concept, “Nyimas Bantaba” creates a place for migration and women’s power, where all problems and concerns of those affected can be openly discussed. Women’s power was the keyword of the fourth program: On Friday, 19 February, Nyima broadcasted live from the ALEX Hall for the first time. In view of International Women’s Day on 8 March, the journalist spoke with guests in the studio and via Zoom on the topic “Women in leadership positions: How we achieve an equal future in a COVID-19 world”.

How many lives does Nyima have?

When Nyima is not producing her show, she works as a social facility manager at Gangway e.V. – an association that runs street social work for young people and adults in Berlin. Nyima not only manages the office there but is also out and about with the social workers two or three times a week, bringing tea and coffee to homeless people and migrants in Berlin parks. Her team asks if there are any problems or if they can help. Nyima can also support her colleagues with translation work.

But that’s not all Nyima is involved in: In addition to her job at Gangway and the production of her show, she is active in “African Women in Trade”, a subsidiary of “American Women in Europe”. Through this platform, African women network and exchange ideas with each other, for example, to learn how to start a business or obtain financing. Nyima often moderates webinars there and imparts tips and tricks to the participants.

How does she fit all these tasks into her everyday life? Nyima herself doesn’t know exactly. “Just the other day, a friend asked me how many lives I have,” she says with a laugh.