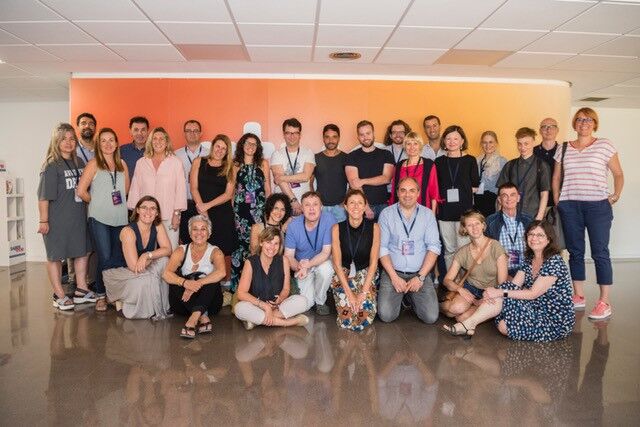 Public service broadcasters from throughout Europe have met to share their rough-cut films for the EU-funded New Neighbours project.

Filmmakers could share their opinions about each other’s work to improve the productions. The rough- cut meeting represents a kind of international audience testing that helps directors and producers make their documentaries work for a broad audience. Each broadcaster tells a story with a specific national insight, but the collection works as a series

“The collection will give a unique European overview of integration, prejudice, fears and humanity. It will show what it means to be a neighbour. It seems to be very easy to stay in your own bubble and not interact, regardless of who your neighbours are. I think there are many reasons why it is good to know your neighbours: from safety to just living peacefully, and if your neighbours come from a distant culture, those things matter even more, concludes Daniela and stresses: I feel privileged working with so many talented and enthusiastic filmmakers from the whole of Europe who use the same film language and dare to open tough topics.”

“I think these nine documentaries will tell a unique story about changing Europe from the viewpoint of common people who feel their life is, for the first time, influenced by new neighbours, who come from all over the world with different cultures, religions and opinions. This complicated process of integration, of withdrawal and acceptance, is filmed within the microcosmos of ordinary people, in ordinary houses in ordinary streets, I hope the series will give an insight that will be recognized by many viewers.”

“These documentaries are at the heart of the EU-funded project “New Neighbours”, carried out with our partners from community media and civil society organizations. We do hope that these programmes will facilitate a discussion around issues of integration and acceptance”

The New Neighbours series will tell moving and exciting stories of present-day Europe, from the picturesque Sicilian village of Sutera which refugees infused with new life to a smart Berlin neighbourhood where local pubs are largely closed to new neighbours, a Barcelona region with a 30% migrant population, where a Pakistani community found their new home and build their own mosque, and a Slovenian village where three Syrian families are introducing huge change.

The series will be released in October and will be broadcasted in nine European countries. It will also provide food for thought at discussions and training sessions that will be held by New Neighbours project consortium partners.